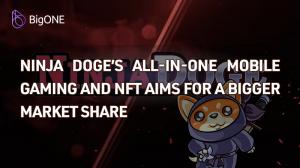 NETHERLANDS, September 17, 2021 /EINPresswire.com/ — BigONE exchange has listed new meme token Ninja Doge, a token that aims to generate revenue right from its launch with an engaging mobile game, NFTs with attractive rewards, an animated series, that are all designed to be highly accessible.

Mobile games are part of Ninja Doge's exciting ambitions, and it was built by one of the same developers who designed Fortnite. According to the creators, 50% of the in-game revenue from skins and gems will be reinvested in Ninja Doge development.

Co-founder Bubs says that Ninja Doge’s wants to, “branch into new territories and increase accessibility. Familiarity with blockchain is not required to play the mobile game or to enjoy the animated series. Purchasing NFT’s is the exception but even so, it has gained mainstream attention as of this year.”

The team have promised that when released, anyone can purchase a limited edition NFT collection card on its website, limited to 3000 cards, featuring characters in the Ninja Doge ecosystem. When you receive the card, you will also have a chance to obtain rare cards. These rare cards will bring additional Dogecoin rewards to NFT holders as follows:

If an NFT holder has more than one rare card, the rewards can be combined. Therefore, when NFT holders have all the rare cards, they’ll get a reward of more than 640%. For example, if someone owns all rare cards and gets a USD 1,000 DOGE reward, they will then receive 6,400 DOGE rewards in each reward cycle (every three days). Ninja Doge claim this will be the largest reward reflection mechanism in the history of NFTs!

As with other “dog-themed” meme tokens, the Ninja Doge comes with its own tax system. This includes a 5% reward to encourage people to “hold” Ninja Doge, 5% for repurchasing and burning to maintain price deflation, 2% is used for price stability, and 1% is donated to local animal charities.

"We are glad to have them listed on BigONE Exchange. Ninja Doge's team is energetic and innovative. Their reward structure is fair too for their users. More importantly, we can support their tokenomics and redistribute them regularly back to their holders. I am already seeing more users onboarded to the exchange. We are excited." Scott Tripp, Marketing Specialist at BigONE Exchange added.

There will be more activities between Ninja Doge and BigONE Exchange. Find out more at https://www.ninjadoge.org/ or https://www.big.one.

About Ninja Doge
Ninja Doge is the first charity token to reward holders with Dogecoin. Mobile Game, NFT Collection & Animated Series in development. Ninja Doge aims to advance the de-fi movement by serving as an ambassador to blockchain adoption. Their objective is to establish a reputation based on trust and brand recognition, extending beyond the crypto community and into under-tapped markets and audiences.

About BigONE
BigONE is a global cryptocurrency exchange that provides a platform for trading various cryptocurrencies. It was founded in 2017 and registered in the Netherlands. The group operates in Russia, Brazil, Vietnam, Seychelles, Singapore, Japan, and Indonesia, providing marketing, investment, and blockchain technology research & development.