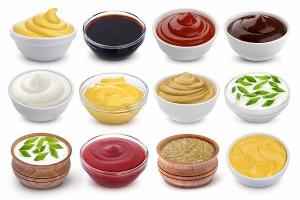 Condiments are a part of the natural human diet and are added to enhance the taste and piquancy of the food.

PORTLAND, OR, UNITED STATES, September 17, 2021 /EINPresswire.com/ — Asia-Pacific Condiments Market by Type (Marinade, Sauce, Ketchup, Mayonnaise, Pickle, and Others), Application (Meat & Seafood Product, Convenience & Ready Meal, Snack, Baked Goods, and Others), and Form (Liquid, Paste, and Dry): Opportunity Analysis and Industry Forecast, 2018-2025. The report offers a thorough analysis of the key winning strategies, market dynamics, market size & estimations, top investment pockets, and competitive landscape. As per the report, the Asia-Pacific condiments market garnered $45.76 billion in 2017 and is expected to reach $71.86 billion by 2025, registering a CAGR of 5.8% from 2017 to 2025.

Increase in cross-cultural interaction owing to globalization and increased foreign travel drives the Asia-Pacific condiments market. Moreover, rise in the number of fast-food outlets and a surge in retail network supplements the growth of the market. However, fluctuations in raw material prices impact the overall cost of manufacturing, thereby restraining the market growth. On the contrary, augmentation of products leading to the emergence of healthier options such as gluten-free sauces, organic sauces, and sauces with no/less preservative concentration is expected to create opportunities for the growth of the Asia-Pacific condiments market in the years to come.

The sauces segment generated more than half of the total market share in 2017 and would maintain its lion's share through 2025, due to their increased use as taste enhancers in almost all kinds of meals, meat & seafoods, and convenience food. Moreover, higher consumption of soy sauces in South East Asian countries, along with growing popularity of chili sauces, barbeque sauce, and other table sauces in Asia-Pacific drives the market growth. However, the marinades segment is expected to register the fastest CAGR of 6.6% from 2017 to 2025. This is due to the increased use of marinades in foodstuffs such as chicken, fish, and other forms of meat. Increasing disposable income of consumers, particularly in China, India, and Indonesia, has led to the rise in consumption of high value meat products, which in turn, boosts the consumption of marinades. The report also analyzes ketchup, mayonnaise, pickles, among others.

Among the applications, meat & seafood products captured one-third of the market share in 2017 and would maintain its lead through 2025. Growing disposable income of consumers, increase in urbanization, and rise in health consciousness in the Asia-Pacific region contribute to the higher consumption of protein rich food such as meat & seafood, thereby driving the demand for condiments in the market. However, the convenience foods & ready meals segment would grow at the fastest CAGR of 6.6% from 2017 to 2025, due to busy lifestyles of consumers. China and India are among the largest consumers of condiment, owing to the presence of large population base and surge in number of QSRs such as McDonalds, Burger King, Wendy's, Subway, and Dunkin' Donuts, which contribute toward the market growth. The study also discusses applications such as snacks, baked goods, among others.
Among the forms, the paste segment accounted for 60% of the market share in 2017 and would maintain its dominance through 2025, as most of the condiments in paste form such as mayonnaise, ketchup, mustard, pickles, pasta sauce are highly consumed with all kinds of food products. However, the liquid segment would grow at the fastest CAGR of 7.0% during the study period. This is because soya sauce is one of the most consumed sauce in Asia-Pacific owing to its application in a lot of dishes such as noodles, Sushi, marinated chicken, pad Thai, and more. The dry segment would grow at a steady pace during the study period.

Among the countries in Asia-Pacific, Japan held a major market share, contributing more than one-third of the total revenue in 2017. This is due to the higher consumption of condiments in meat & seafood products and higher affluent population in the region. However, India would register the fastest CAGR of 11.7% from 2017 to 2025, owing to rise in disposable income of consumers, increase in popularity of fast-foods, and expanding retail network in the region. The others regions analyzed in the study are China, Australia, Indonesia, Thailand, Singapore, Malaysia, Vietnam, and the rest of Asia-Pacific.