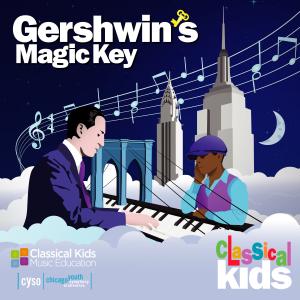 It’s ‘extra, extra! Read all about it!’ as audiences step into the streets of 1920s New York as a newspaper boy has a chance encounter with the famous composer, George Gershwin.

From there, the musical masterpieces of one of America’s greatest composers are magically woven into a 50-minute story as the two actors explore the sights and sounds of the city — sharing anecdotes and observations based on true incidents from the composer’s extraordinary life along the way.

To be filed under history, drama, music, and fun, "Gershwin’s Magic Key" is the first-ever educationally entertaining musical story that introduces children to his life’s work, and is endorsed by the Gershwin Family Interests and supported by the National Endowment for the Arts. The robust production features the Chicago Youth Symphony Orchestras, and premiered with the National Symphony Orchestra at the Kennedy Center for the Performing Arts.

With a dedicated mission to enrich the lives of children through an exciting and educational point of entry to the genre, the group ensures their shows are available to schools wherever they play — including up to 30 orchestras across North America, and International trips on alternating years; as of now, they’re slated to visit Malaysia and Hong Kong in 2022.

The organization also hosts workshops in the Chicago area for schools — which, as it happens, is how they managed to complete the recording of "Gershwin’s Magic Key" prior to COVID-19 restrictions pressing pause on their tour schedule.

Entertainment Weekly calls Classical Kids LIVE! “art made accessible; nobody does it better than Classical Kids!” and nowhere does this resonate more than "Gershwin’s Magic Key" and other Classical Kids LIVE! releases’ available through local public libraries for digital lending in addition to traditional sales. Incidentally, sales of "Gershwin’s Magic Key" will assist in keeping the philanthropic organization stable through the remainder of pandemic-related touring restrictions.

First formed in 1999, the Classical Kids Series is a Platinum-selling and award-winning series proven effective at creating awareness and appreciation for Classical music among new generations.