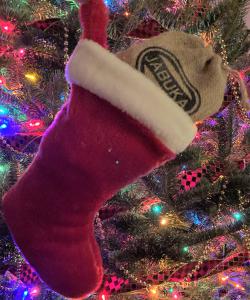 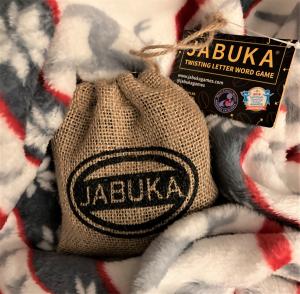 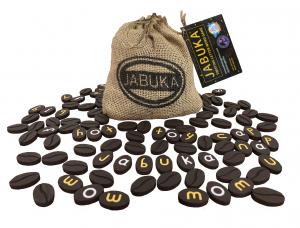 TORONTO, ON, CANADA, December 12, 2020 /EINPresswire.com/ — As the stockings are hung
by the chimney with care,
there will be lots of fun in store
if JABUKA is there.

Jabuka is the new rotating letter word game that’s brewing up a lot of fun this holiday season.

Martin Russocki, inventor of JABUKA, said, “Jabuka is a simple, compact, word game of coffee bean shaped pieces. You can play just about anywhere on a flat surface. Its compact size is perfect for a stocking stuffer gift, but don’t let its small size fool you, Jabuka is bursting with fun for the whole family.”

This holiday it seems that many people will be learning to speak Jabuka. Russocki explained, “I got the idea for Jabuka in a coffee shop while I was fiddling with a coffee bean on the table. I realized that when you spun the letter “m” It became an “E” or a “W”. I felt like I was inventing a whole new alphabet and I called the language Jabuka!”

The coffee theme evolved from the longstanding history of games in coffee houses. It is the perfect platform for the fun and tactile shape of the pieces, the packaging, and as an example of when and where you can play – just about anywhere. Jabuka (MSRP $19.95 for 2-4 players ages 8+) is now the small, portable, quick and easy game that you can play anywhere.

“Jabuka is the size for a stocking stuffer, and it’s a perfect gift for any coffee lover as a complement to their daily ritual of coffee, a dose of news or literature and a new brain teaser. It’s a suggestion for fans of games like Scrabble, Bananagrams, and as an alternative to board games, crosswords, or Sudoku.”

Recently, some of the nation’s top toy testers spilled the beans about Jabuka when the game received the Oppenheim Toy Portfolio Gold Seal Award 2020 and the 2020 PAL (Play On Words) Award, which are now added to its: Best Game of the Year Award from Creative Play Magazine, Moms Choice Gold Award, ASTRA Top Toy of the Year Finalist, and the National Parenting Publications of America Winner.

How to Play Jabuka
Players spill the beans and start a battle of words (official rules at www.jabukagames.com). No turn taking. Make words and steal words at the same time from other players with clever word scrambles and adding, rearranging and twisting letters. Notice the yellow letters that can be twisted, such as:
● “E” is “m” or “w”
● “c” is “u” or “n”
● “r” can be “j”;
● “t” is also “x”;
● and more
When you first spill the beans, some land face down, leave those face down until everyone agrees to flip and turn over 2 beans at a time to reveal new letters. Play. Repeat. Count beans when the last 2 are filled. The player with the most beans that make words wins! Game on.

About Jabuka Games, Inc.
Based in Toronto, Ontario, Jabuka Games Inc. is a start-up game designer and marketer of new and original games. Its premier product is a game of the same name: JABUKA, a coffee themed word game. If its first product is any indication of its future, Jabuka Games is destined to be a very successful entry into the toy and game industry. JABUKA has already received overwhelmingly positive response, recognized with four major awards for excellence in quality, design, educational and entertainment value, originality, and appeal. In the short time since its debut at the New York Toy Fair, JABUKA has sold over 60,000 games worldwide. It’s available at Indigo locations across Canada, over 300 stores in the U.S., and online everywhere For additional information, visit www.jabukagames.com and interact with the company on Facebook, Instagram, Twitter and YouTube.