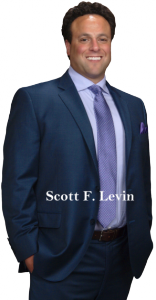 Scott Levin, "Chief Peacekeeper", is responsible for helping hundreds of families to find peace in their divorce.

LOS ANGELES, CA, UNITED STATES, August 18, 2020 /EINPresswire.com/ — Since 2004, Scott Levin, a California native, husband and father of three young children, has been practicing law. Having graduated with his law degree from the University of Virginia, he got his start as a family law litigator. Nearly a decade consisting of endless battles spent in court, Scott felt defeated and disillusioned by the inability of the common couple to achieve peaceful agreements. The first step of a litigation attorney when engaging a new client is to try to understand as many negative things about the other party as possible, according to Mr. Levin. While one spouse is busy digging up dirt on the other, you can be sure that the other party with their own attorney is doing exactly the same. When ample "dirt" is revealed, the proceedings will begin. This procedure is not only frustrating but also extremely lengthy; California's typical court case is around 2 years in duration. This process can prove to be extremely toxic in many cases and both parties are forced to live in the past, constantly digging up bad memories, and unable to look forward to or achieve any real growth during this season. The situation becomes even more difficult when children are involved, as many parents struggle with the co-parent and exist amicably while the proceedings are still in motion.

Although Scott won numerous cases, he never really felt as though he was "winning" upon seeing the destruction of the entire family to just come to an agreement. One day, after a terribly challenging case, and having recently learned of the negative effects on children of the divorce ligation, Mr. Levin realized that he could not continue to represent spouses in their war against each other. He overhauled his practice immediately and set up a mediation firm. Vowing to never take another litigation case again. Almost a decade later, Scott remains true to his word and is responsible for helping hundreds of families to find peace in their divorce.

Mr. Levin is known among his clients as the "Chief Peacekeeper." In comparison to a litigation attorney, Scott does not represent one spouse, but instead enters into a relationship with both spouses with the intention of achieving an amicable arrangement, saving the assets, and ensuring the future of each party. There's already so much confusion about a divorce, according to Chief Peacekeeper Levin, the last thing a person wants to think about is what the divorce will cost them or end up with thousands of dollars in unforeseen fees. After Mr. Levin and his female co-mediator have completed the initial meeting and decided that all sides are in a mutually beneficial match, Scott establishes a team with the spouses, stating that they are all on the same side from here on, to battle the challenges of divorces itself, not one another.

From here, Chief Peacekeeper Levin is willing to listen to the wishes and needs of both spouses to best help them come up with innovative solutions that will benefit both parties, protect the children, if applicable, and allow each spouse to prepare for their future. This process involves the division of all assets and debts, and the establishment of a parenting plan that addresses all co-parenting ins and outs. As a Certified Divorce Financial Analyst (CDFA), Mr. Levin is highly knowledgeable in financial matters and is able to provide his clients with the best financial advice possible. Because of his incredible success and the impact his methods have had on the lives of countless couples and families, Scott rapidly became one of Southern California 's top mediation lawyers, though his services are available to clients across the nation.