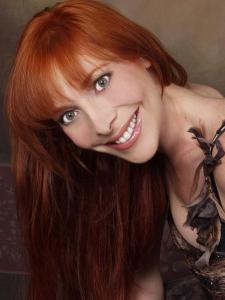 LOS ANGELES, CA, UNITED STATES, December 7, 2019 /EINPresswire.com/ — Nicole Brandon, CEO of Artistry in Motion and a talented actress/producer, has had a successful year so far. She’s made great strides in many of her professional pursuits, as well as being been chosen by the “Best of Los Angeles Award” community as one of L.A.’s “100 Most Fascinating People.” Now, the visionary woman will be hosting and producing “The Medicine Voice,” a new Michel Pascal show being performed at Carnegie Hall this December launched by Never Alone, a Film, Movement and a Vision for the Future.

“Michel Pascal, one of the greatest voices of all time is singing, and that is a magical thing because nobody sings like Michel,” praises Brandon.

Taking place Tuesday December 10, 2019 at 8:00 p.m. at the Weill Recital Hall in Carnegie Hall, “The Medicine Voice,” a Michel Pascal concert, is being staged to support the #NeverAlone movement and to bring awareness to mental health and suicide prevention. The World Event is being Produced by; Actress, Author and Renowned Humanitarian Nicole Brandon and Michel Pascal, the magical medicine voice of the century. “I'm so proud of this extraordinary show,” states Nicole Brandon. “Tickets will go fast, so hurry and reach out to today.” (carnegiehall.org or 212-247-7800)

Michel Pascal will be head lining this concert, but many more talented groups will be joining him on stage. According to Nicole Brandon, "Michel will give the concert with probably one of the best bands on stage, with Earth, Wind & Fires superstar Myron McKinley, along with our favorite musicians in America, the incomparable drummer, Stacey Lamont Snyder, the profoundly talented mystic bass player Ian Martin and the versatile, engaging and powerhouse guitar playing of Paul Pesco, the saxophone player of "Sting" Butch Thomas and the choir of the first Unity Spiritual Campus will join us for the final fireworks, featuring the incredible lead vocal and vocal director Wanda Nero Butler, Rebeka Mooney, Tracey Cheyenne Johnson and Camille Raciopio. It will be quite a show!”

To continue such artistic trends, there will be an interpretive movement by the dancing extraordinaire, Sonya Om. In addition, poetry and lyrics will be provided by Ena Love and new songs, with the powerful words of Deepak Chopra.

Discover the teaser of the show at Carnegie Hall
https://www.youtube.com/watch?v=Rk3jMem4rOM

“Yes, it will be an unforgettable show,” concludes Nicole Brandon, “I look forward to seeing you on December 10th at Carnegie Hall.”

Nicole Brandon is a powerhouse and known around the world for her extraordinary versatility in touching people’s lives. On and off the camera her name is synonymous with success and change creation around the globe. Nicole Brandon is the Executive Producer and one of the Lead Actors in the New Sit-Com "Temporary Insanity" while simultaneously filming "The Offering" a new Feature Film, in which she stars with French mega blockbuster actress, Gabriella Wright.

Nicole is known internationally for her five popular and highly success radio shows, "Unlimited Life," "Hour Glass Bride," "Parenting Today," "Keys to Success," and "Happily Ever After." Her online segments "Ready to Look Younger" compel audiences to tune in and to learn the secrets, hints, tools and keys to eternal youth and happier and healthier living.

Nicole is a New York Times Bestselling author having penned 32 books and numerous television programs. Today you will find her as a Producer for Goliath Films and Media Holdings Inc. To add to the recipe of success, Nicole was inducted into the "Martial Arts Hall of Fame" and she was inducted into the "Elite Black Belt Hall of Fame". Nicole is a "National and International Title Winner" in the World of Dance and her "Hotel Workout Videos" can be seen in 5 Star Hotels throughout the globe.

Nicole is most highly recognized as a Philanthropist and Humanitarian titled the "Ambassador of Kindness" around the world. Nicole has been "Knighted" for her Humanitarian work and most recently she received the "Presidential Volunteer Service Award" for her Humanitarian efforts, service and love. She is a proud member of the Transformational Leadership Council (The Secret) and a she is a chosen carrier of the World Peace Flame. On May 25th "The USA Martial Arts Hall of Fame" will name her "International Actress of the Year" recognizing her work and "Motion Mastery in Motion Picture Arts and TV".

Nicole Brandon owns and operates Nicole Brandon Worldwide, Unlimited Life, The Hotel Workout, Hour Glass Bride and "Artistry in Motion", a phrase she coined, which of course, is the way, she lives.