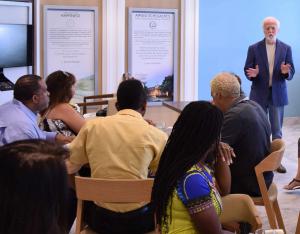 Guest speaker Terry Hitchcock detailed his account of inspiring others to take action at the CCV Charity Networking Luncheon, advising nonprofit leaders on how to motivate others to contribute to their causes.

Changing the society that surrounds us for the better is not a one-person job. Knowing how to rouse others into contributing is pivotal for a nonprofit and it’s done, in part, by setting the example.”
— Clemence Chevrot, Director of the CCV Center

CLEARWATER, FL, US, June 27, 2019 /EINPresswire.com/ — On June 26th, fifteen Tampa Bay nonprofit organizations gathered at the Clearwater Community Volunteers Center for its monthly Charity Networking luncheon. Terry Hitchcock, motivational speaker and author, whose life was the subject of a documentary “Nothing is Impossible”, narrated by Billy Bob Thornton, advised the audience on how to inspire others to share in their nonprofits’ missions.

The luncheon began at 11:30 am inside the café-style gathering space of the CCV Center. Guests were invited to socialize with other nonprofits to promote the development of future partnerships.

Michael Soltero, manager of the CCV Center, served as the MC. He welcomed the attendees to the luncheon, before turning the stage over to the keynote speaker.

Hitchcock opened by giving some history of his accomplishments in the field of nonprofit work. He spoke about using his experience as a single parent to inspire others. He described his 2000-mile run in 75 consecutive days to bring about awareness of single-parenting and prompting others to take action.

Clemence Chevrot, Director of the CCV Center said, “Changing the society that surrounds us for the better is not a one-person job. Knowing how to rouse others into contributing is pivotal for a nonprofit and it’s done, in part, by setting the example. Humanitarian L. Ron Hubbard summed this up as, ‘There are many people one influences. The influence can be good or it can be bad. Others around one cannot help but be influenced by this, no matter what they say.’”

The luncheon concluded with Michael Soltero inviting guests to stand up and deliver a short introduction of themselves and their respective nonprofit organization. The volunteers and charity leaders then exchanged contact information and planned out new community projects together.

Through sponsorship of the Church of Scientology, the CCV Center offers its facilities as a meeting space or event venue at no cost to nonprofit organizations in order to further their help into their communities.

To find out more information about the Clearwater Community Volunteers Center or to RSVP for next month’s luncheon on July 31st please call Michael Soltero at (727) 316-5309 or email ccvcenter@ccvfl.org.

About the Clearwater Community Volunteers:

The Clearwater Community Volunteers have over 25 years of community service under their belt with over 150,000 families and children helped since their founding in 1992. Sponsored by the Church of Scientology Flag Service Organization, they stay true to their reputation of helping others with their new center located on the corner of Fort Harrison Avenue and Drew Street in downtown Clearwater.