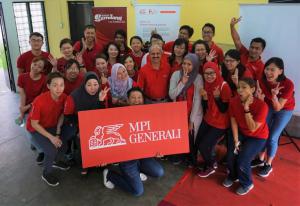 MPI Generali and Generasi Gemilang all geared up! 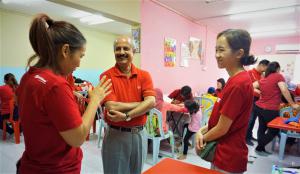 K.G. Krishnamoorthy Rao, CEO MPI Generali (center) with Riana and Kylie from Generasi Gemlang team. At the background, the children enjoying the arts and craft session with the volunteers. 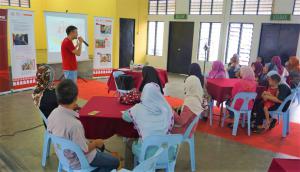 The program is meant to empower and equip families, especially parents, with skills that address their specific needs and concerns to improve parent-child relationship and family well-being.”
— K.G. Krishnamoorthy Rao, CEO MPI Generali

KUALA LUMPUR, MALAYSIA, April 27, 2019 /EINPresswire.com/ — MPI Generali Insurans Berhad (MPI Gen) embarked on a global CSR movement known as The Human Safety Net (THSN); a flagship initiative by Generali Group to help some of the most vulnerable communities around the world.

In a recent Unicef report, parents in B40 communities spend an average of 48 working hours a week yet earn much less than an average worker. In order to make ends meet, they have to spend more time working to feed their families at the expense of spending quality time with their children.

In partnership with Yayasan Generasi Gemilang (Generasi Gemilang); a well-established Malaysian charitable foundation, the journey between MPI Generali and Generasi Gemilang began in 2018 when it was apparent that both parties shared the same values and passion to bring positive impact to such families.

It is important to plan the approach to reach out to the community with the input and feedback from the local community, hence the volunteers from MPI Generali and Generasi Gemilang conducted a community needs assessment at the end of last year in PPR Taman Putra Damai. “Understanding the community needs and interest is key to building a successful sustainable initiative. From the assessment, we found that although most families physically spend time together at least once a week, two-thirds of the parents felt they needed to be equipped with parenting skills in the area of behaviour and discipline and more than half of them needed skills on how to communicate with their children better,” quoted Melissa Ngiam, COO of Generasi Gemilang.

“Families influenced by the Asian culture in general are not used to practicing open communication or affection. Through our sessions, we help families understand one another using simple yet meaningful activities such as identifying each other’s love language and encouraging them to put it to practice. After our sessions, a single mother who had a strained relationship with her teenage son began to put what they had learnt to practice. The mother began praising her son regularly whilst her son helped with the household chores as a way to show love to one another. Over time, their relationship has improved and they now communicate more,” shared Vicky Liew, Section Head of Family Services in Generasi Gemilang.

This year, the team had successfully reached out to an average of 45 families with 57 individual parents and 97 children with the Family Education program. “The program is meant to empower and equip families, especially parents, with skills that address their specific needs and concerns to improve parent-child relationship and family well-being” K.G Krishnamoorthy Rao mentioned.

“This is only the start, we have more planned over the next 3 years to ensure we are able to see real impact to the lives of families we have touched by working on interventions that focuses on communication, early learning, health, nutrition, safety and security“ added K.G Krishnamoorthy Rao.

MPI Generali Insurans Berhad, leads the THSN (The Human Safety Net) Malaysian Chapter in partnership with Generasi Gemilang with focus on family programs to empower underserved parents by giving support and stimulation to the children during their formative time of life.

About MPI Generali Insurans Berhad
MPI Generali Insurans Berhad (“MPI Generali”), is a strategic partnership between Multi-Purpose Capital Holdings Berhad, which is a wholly owned subsidiary of MPHB Capital Berhad, a public listed company on the Bursa Malaysia, and Assicurazioni Generali S.p.A. (“Generali”), one of the largest global insurance providers with a rich heritage going back to 1831.
Established in 1973 and licensed by Bank Negara Malaysia under the Financial Services Act, 2013, MPI Generali’s core business is underwriting of general insurance business offering innovative insurance products and services to individual and corporate customers.

About Generasi Gemilang
YAYASAN GENERASI GEMILANG (GG) is a foundation committed to building a strong nation by raising exemplary next-generation and strengthening families. We believe that Love transforms lives; therefore our work inspires hope in people and empowers them to live life to their fullest potential. These people are children, youth, families, schools, corporations and community at large. Governed by a Board of Trustees, GG is based in the Klang Valley and conducts services throughout Malaysia. Formerly known as Persatuan Kebajikan Generasi Gemilang Kuala Lumpur dan Selangor, GG was incorporated as a foundation in December 2014.

About PPR Taman Putra Damai
Projek Perumahan Rakyat (PPR) is a government program for the resettlement of squatters and residence requirements for low-income families. Located in the heart of Lembah Subang, PPR Taman Putra Damai (PPR TPD) is a low-cost housing area that spans across 8 blocks with a total of 3,000 units. At one point of time, this community was the largest PPR in Malaysia.