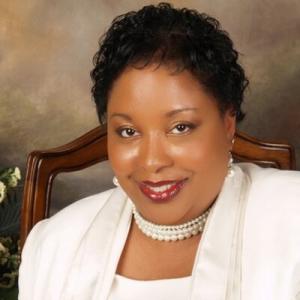 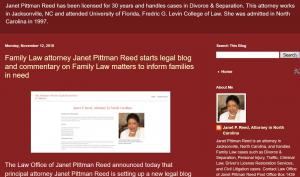 The Blog of Janet Reed, Esq. will focus primarily on Family and Domestic Relations Law, the publicly available information, and how the law is changing.

many affected families do not know that the court system and non-profit organizations provides a lot of support. For example, the North Carolina Judicial Branch website has several videos that explain”
— Janet Reed, North Carolina lawyer

JACKSONVILLE, NORTH CAROLINA, UNITED STATES, November 13, 2018 /EINPresswire.com/ — The Law Office of Janet Pittman Reed announced today that principal attorney Janet Reed is setting up a new legal blog https://janetreedesq.blogspot.com/ which will focus primarily on Family and Domestic Relations Law, how to locate information, and how the law is changing.

“With all the sometimes confusing information regarding Family Law, I felt that I could help explain the important issues at hand to families in need” said Janet Pittman Reed. “I have more than a decade of experience working in this area, and can help people understand the issues before a dispute develops, and obtain initial information when they need legal help.”

Family law does not only encompass marriage, children, divorce, and marital assets, but also implicates tax and retirement issues. The procedures are very complex and hard to understand for a layperson.

Ms. Reed is planning to inform affected families so that they are better prepared for what awaits them in a family law proceeding, such as divorce or child custody.

Ms. Reed explains that she has noticed in her practice that “many affected families do not know that the court system and non-profit organizations provides a lot of support. For example, the North Carolina Judicial Branch website has several videos that explain family law proceedings, including a video on Family Court Orientation and a new video on Parent Education, Access and Visitation.”

This is based on Session Law 1999-237 House Bill 168 Section 17.16, which authorized the North Carolina Administrative Office of the Courts (NCAOC) to establish an educational program for parents who are parties to a custody or visitation action and to administer any parent education. These parent education programs make divorcing parents or parents living in separate homes aware of the needs of their children. The informative video that the court system provides, “The Most Important Job,” provides guidance for parents from professionals as well as from the child's perspective. Family courts provide this type of education locally according to their local rules. To accompany this video, the court system has published a handbook, The Most Important Job: Parenting Information for Families Living Apart (North Carolina Parent Education Handbook). Ms. Reed believes that such information should be provides more widely to lessen the stress and burden on families, and she will contribute to that.

Ms. Reed also explains that often multi-state issues are involved that make this field of law even more complex. “For example, family law is sometimes implicated in child custody cases when you have a spouse from a different State. When one parent takes the child to another State, or from another to North Carolina, this may result in a legal dispute as to in which State the child should live. Other areas of broader implications are marriages with spouses from different states, or where one spouse was married before.”

Janet Pittman Reed is planning to inform the public about such available information, procedures and developments so that any family law matter can proceed more smoothly and put less stress on the family and particularly children.

Janet P. Reed is an attorney in Jacksonville, North Carolina, and handles Family Law cases such as Divorce & Separation.