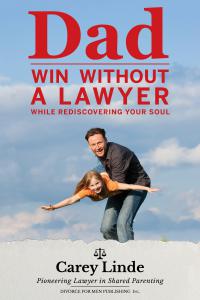 "Carey Linde is a brilliant attorney with not just the experience, but also the integrity, insight and courage to replace the best interests of his pocketbook with the best interests of our children. Dad: Win without a Lawyer is one of the most important books ever written for the millions of children whose dads either cannot afford to have an attorney fight for them in court or who do not wish to use their college education money to do so. "

VANCOUVER – September 29, 2017 – Just as the number of self-represented parties in child custody cases approaches 50%, comes Dad, Win Without a Lawyer, a new book by divorce lawyer Carey Linde. He pioneered shared parenting in Canada for fathers and revolutionized children's equal time with both parents.

Linde coaches fathers — or anyone caught in the psychological quicksand of any life shattering nightmare — how to recover their inner true self as the first step to succeed in the challenge ahead. The book offers up a toolbox of court tips, tactics, and strategies for fathers fighting to keep themselves meaningfully in the lives of their children.

“You wouldn't want to perform your own heart surgery, but you sure can do a great job – perhaps the best – speaking from your heart on behalf of your own children,” said Carey Linde, family lawyer and author of Dad, Win Without a Lawyer. “There is no person better at any fee. You are your own best advocate.”

Dad, Win Without a Lawyer was written with the self-represented father in mind. According to a Justice Canada Survey of Family Courts, an estimated 40% to 57% of parties in family court are self-represented. These parents are often not prepared to deal with the rigors and complexity of the court system. And almost all self-represented litigants overlook the crucial mental and psychological preparedness required to do well in a situation that, for many, is the most stressful event in their life.

“This book, though written for fathers, can also be of use to women who may find themselves in the same predicament,” said Carey Linde. “Outside of the courtroom, neither gender has a monopoly on being the most suitable parent.”

Dad, Win Without a Lawyer is organized into 4 parts. In part 1, Linde lays the groundwork to help the reader prepare themselves psychologically. Preparedness of person and mind is essential to success in court and post-separation in life. Parents have to become stronger and better than they have ever been. Part 2 delves into the inner workings of the ex-partner, their thought process, and what the reader can expect to encounter from him/her, including allegations of abuse, parental alienation, and other gotchas all too common in family law. In Parts 3 and 4, Linde explores the basics of family law, rules of the court, what judges do and don’t want to see, and legal procedures that readers will have to become familiar with. Most importantly, the author also reveals, for the first time, how the court system really works, including what the author calls the “Elephant in the Courtroom” — hidden biases that, if not navigated carefully, can threaten to undermine the entire case.

About the Author
A lawyer for 40 years, Carey Linde pioneered the movement for equal-time shared parenting in the courts. He has been fighting for this idea before phrases such as “co-parenting” and “shared parenting” became popular.

Carey is a founding member of Canadian Lawyers for Shared Parenting. He is a past member of the Trial Lawyers’ Association of British Columbia, the American Trial Lawyers’ Association, Vancouver M.E.N., and of Seattle M.E.N.. He obtained his B.A. in psychology and obtained a law degree from the University of British Columbia, where he was the acting president of the student body 1968-69 and president of his graduating class in law school 1970. 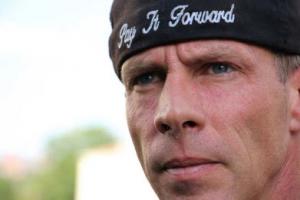 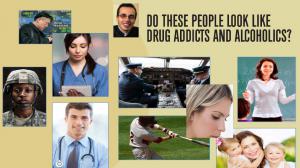 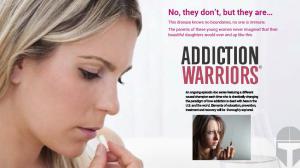 Parents and families don't know what to do anymore. They are scared to death to lose their loved ones. They have tried everything and nothing is working.

Parents and families don't know what to do anymore. They are scared to death to lose their loved ones. They have tried everything and nothing is working.”
— Executive Producer Mark Ehrenkranz

MORRISTOWN, NJ, UNITED STATES, October 3, 2017 /EINPresswire.com/ — An ongoing episodic doc series is being developed with an accompanying tour that will feature game-changing addiction warriors taking radically different approaches to the malady. Addiction Warriors will expose the latest methods and the need for a paradigm shift with causal champions. The fundamental difference being non-judgemental acceptance versus fear and resistance. The funding for this project is through supportive donations by those who want to help it happen via www.addictionwarriors.org

The pursuits are being accomplished via a strategic and fiscal sponsorship partnership with Creative Visions. They inspire and empower worldwide creative activism. Kathy Eldon and her team has established a strong network of artists and media makers who are telling critical stories about problems that need to be solved. They support activists to pilot innovative arts and education programs affecting change.

The malady here has little to do with the substance or habit, whether it be sex, gambling, food, work or money. It has a lot to do with modernity, social pressures, cultural malaise, and substitutions for feeling trapped, isolated or riddled with anxiety. It has much more to do with fear, alienation, and overwhelming stress or loss. Psychological imbalances, brain illness, and overall discomfort in one’s skin cause individuals to self-medicate to escape, be more in control, and or simply wanting to feel better.

No one plans to get addicted from natural desires to get high, “cut the edge” or from to blowing off steam with a temporary escape. What ensues is the phenomenon of wanting, and the inevitable brain alterations which render habit, cravings and then the need. Millennials and Gen Z’ers may be particularly susceptible due to helicopter parenting, device addiction, and political correctness where everyone is a “winner.” Tempering feelings along with the intensity and increased pressures of the world severely challenges healthy coping skills and healthy dealing with rejection and disappointment.

The fact is that teenagers will experiment for a multitude of reasons and will want to experience forbidden fruits no matter what. Youths from ages 11-26 are undergoing emotional maturity and their brains are still forming. They are wired for indestructability, share a cavalier attitude, and know better than anyone older than them. They are coded to share a different reality which rejects healthy fear, loves drama, dangerous feats, and outrageous stories. Parents forbidding them to try drugs simply does not work. What they fill their minds with on-line only lowers the bar for further unhealthy behavior.

The visual style will be fast paced with contemporary youthful elements for maximum engagement. This doc series will consolidate and stylishly uncover the causes, cutting-edge research, and treatment of addiction from a street savvy point of view. The value of one addict helping another is unparalleled. The creation and execution of this content will directly appeal to audiences via a deeply seated connection. The material will be developed by recovering addicts with longtime sobriety, doctors, treatment professionals, recovering families, and other experts in the field. Everyone, especially parents, teachers, law enforcement and employers need to know the truths if their skills are to be productive. The activation of a touring road-show will be an effective method of outreach and education.

Mark Bakshi, is the former Worldwide President of Feature Production at Paramount. Most recently, he served as executive producer on the critically acclaimed Foxcatcher starring Channing Tatum, Steve Carell, and Mark Ruffalo as well as the box office giant World War Z and the Brad Pitt starring Moneyball. Prior to Moneyball, he was a consulting producer on the animated feature Rango. He enjoyed a 14-year run at Paramount overseeing all live-action and animated theatrical releases. While there, he supervised over 150 feature film productions, including titles such as Indiana Jones and The Kingdom Of The Crystal Skull, Transformers, the Mission: Impossible franchise, Saving Private Ryan and Titanic. He also developed and produced for HBO and served as a production executive at Buena Vista Pictures and Walt Disney Television.

Mike S. Ryan is a veteran of the independent film community, who started out in the industry’s 1990’s heyday with films like Ang Lee’s The Ice Storm and Todd Hayne’s Far from Heaven. As a producer, he has been responsible for a remarkable group of films in the last five years, most made for under $3 million. Mike is an Independent Spirit “Producer of the Year” award nominee and one of Variety’s “Top Ten Producers to Watch” from 2007. Mike’s films have garnered nominations and prizes from the Academy Awards, Independent Spirit Awards, Gotham Awards and many more. JUNEBUG, starring Amy Adams, made its international premiere at Cannes in 2005 and went on to be one of the lowest-budgeted feature films ever nominated for an Oscar (Best Supporting Actress, 2005). He also teaches at Columbia, Emerson and in Berlin

Mark Ehrenkranz, has been producing The NY Film Critics Series® (NYFCS®) with Peter Travers of Rolling Stone Magazine and ABC-TV, for 21 years. He is also producing Turbulent Souls a full length feature film based on the memoirs of Stephen J. Dubner (co-author of Freakonomics ). He is the head writer on a new Rock-Doc Series INSIDE THE DEVIL’S PLAYHOUSE, The Last 100 Days of Historic Webster Hall and Untitled Sea Matthew Modine Sea Project. Mark and Mike S. Ryan are producing The Edison Papers. He recently produced Wayne’s World’s 25th Anniversary in theaters with Mike Meyers, Lorne Michaels, Rob Lowe, Dana Carvey and Director Penelope Spheeris.

Elaine Pasqua, CSP, is one of the most dynamic and effective speakers addressing positive choices for outstanding performance. Once described as “the biggest little thing I’ve ever seen,” this energetic and humorous dynamo, has been traversing the country for more than two decades, transforming the lives of more than a half a million people. Her expertise is in high-risk drinking, sexual assault, sexual health, and drug abuse. Elaine’s passion for making a difference has remarkably taken her from working with more than 600 universities nationwide, to numerous professional organizations, the military, and 30 pro athletic teams from the NFL,